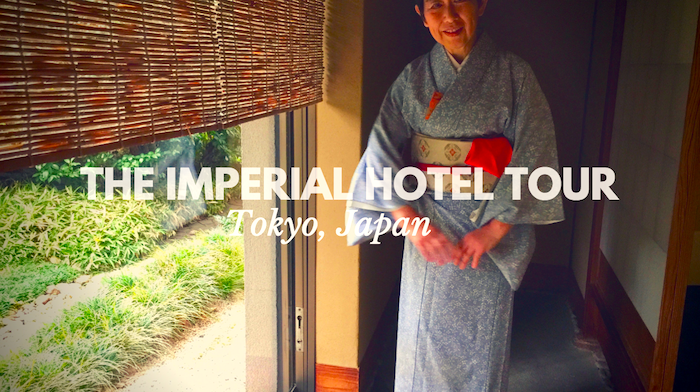 MY ANA trip to Tokyo arranged accommodation at the beautiful Imperial Hotel, a 120-year-old legendary landmark in Tokyo that welcomed royalties, heads of state, and world and business leaders.

This grand hotel located in central Tokyo at the Hibiya area around Japan’s Royal Palace corner. This hotel houses 17 restaurants and a plaza with shops and boutiques from fine antiques to clothing and electronics.

Tucked in the Imperial Level on the 15th floor, I was warmly greeted by Imperial Hotel staff welcoming me to my room with treats and handmade origami. As I’m looking back at my trip now, the lovely personalized touches have been the core of the warmth I felt from staying there. There were handwritten notes and origami flowers left by housekeeping. I even received a bath soak with a sweet handwritten message on the actual packet. I for one who travels to Asia often can honestly say that the Japanese hospitality is beyond impeccable and above all I’ve seen around.

When they say call them for anything, they mean ANYTHING! Hospitality beyond belief at the #ImperialHotel 帝国ホテル! TY for the fruit bowl and flowers! #JPNTour #Tokyo #ANA

Our Hotel Tour day started at breakfast at Les Saison with Mr. Sadayasu, President, and General Manager. I learned that the first Imperial Hotel one opened in 1890 as Japan’s state guest house, but the second generation in 1923 designed architect Frank Lloyd Wright, whose work Chicagoans are very familiar with since his designs can be found everywhere in and around Chicagoland. The Imperial Hotel even have a Frank Lloyd Wright suite and an Old Imperial Bar.

We also visited the Shinto Shrine, participated in a traditional tea ceremony at Tokoan, feasted on a Kaiseki lunch at Nadaman, and for dinner enjoyed my first Kobe Beef Teppanyaki dinner at Kamon. It was a full cultural immersion of a day, and I wish there were more time to breathe it all in slowly.

I was drooling even before he cooked my Kobe Beef that sinfully melted in my mouth. Way beyond my expectation! Wow! #ImperialHotel #Japan #Tokyo #JPNtour

On my last night stay at the hotel, we went to SushiGen for dinner. I ordered cold sake with my sushi and the meal was divine. It was a perfect ending after a flight back from a day trip to Kyoto.

In my short five days at the Imperial Hotel, I’ve eaten at five restaurants, visited the Tokoan, the Shinto Shrine, and the Imperial Bar. Still, there are more to places to visit, shop, and eat just inside the Imperial Hotel alone. A mission I will take the next time I’m back in Tokyo!