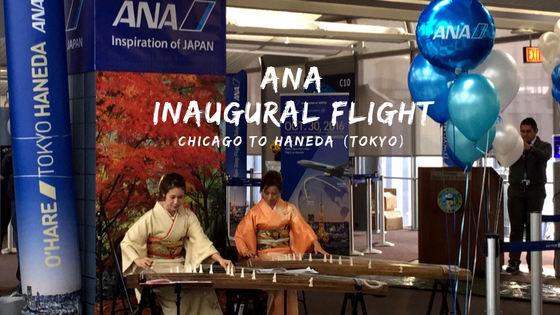 ANA just launched a direct flight from Chicago O’Hare to Haneda Airport in Tokyo, Japan and lucky me; I got to be part of the Inaugural flight.

So after the airline launch festivities at O’Hare, I finally boarded my flight and was excited and thrilled that I was placed in the Business Class section where all seats have an aisle and a full-on bed. It’s a great start to my 13-hour flight to Japan

At first, I opened all my gifts and amenities and learned my way around my little pod. After that, a four-course traditional Japanese meal, which we learned, later on, were menus collaborated with chefs and restaurants in Japan. I even snuck in a snack in between hours of sleep.

Our first morning in Tokyo was rainy. We were scheduled to visit a couple of ANA Headquarters, and our first stop was at the training center. There we witnessed Flight Attendants learning and practicing everything for safety and service. ANA is known for their very high standard of Japanese Hospitality, and it was fascinating to see them behind the scene.

Next, we’re back to Haneda Airport where we arrived the night before which happens to be the nearest Airport to central Tokyo. There we walked through the experience of facilities like the ANA departure lounge and ticketing area.

After a long day at the airport, were treated with a beautiful view of Tokyo from the Shiodome ANA building. The airline Vice President, Mr. Ito, came and spoke to us about the global awareness they want to create with the high Japanese quality they will continue to deliver.

Our first Tokyo day ended with a walk to the famous Ginza district and an Izakaya dinner with the ANA group.

Also, check out My Day Tour to Kyoto with ANA

Want to Discover / ReDiscover Six Flags With Your Family?