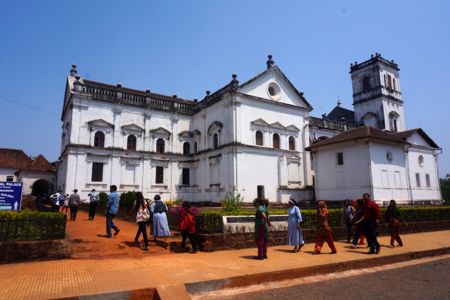 Goa is India’s smallest state but the richest one. Portuguese ruled this land for centuries and so the influence is clearly found in their architectural landscapes and most apparent in presence of Christianity in Goa. My host is DoubleTree by Hilton Hotel – Goa – Baga – Arpora and I was delighted that they have this tour as part of my Goa itinerary.

One of the famous site in Goa is the Basilica of Bom Jesus deemed as a UNESCO World Heritage Site and still holds the mortal remains of St. Francis Xavier. Current Pope Francis is supposedly heading to Goa for the the public viewing of his incorrupt body that is done every 10 years (2004 was the last year this was done).

Right across from the Basilica is the Se Cathedral. Se Cathedral is the oldest and most celebrated church in Goa and is said to be one of the largest churches in Asia. The Basilica and Cathedral are located in Old Goa, the once capital of Goa.

Check out all following India posts: