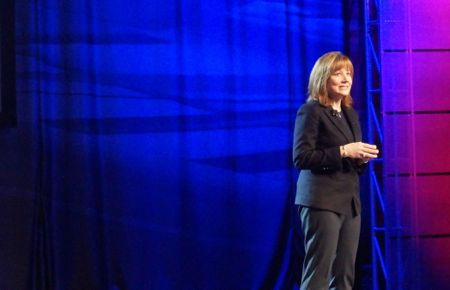 While women executives have been slowly infiltrating the automotive world on many top level positions, Mary Barra‘s appointment as General Motor‘s new CEO has set her as the highest ranking woman in the automotive industry and much like Yahoo’s announcement on Mayer, Barra’s new job move has created a lot of excitement. This one is perfectly timed to kicking off this year’s North American International Auto Show.

Last week’s GMC Reveal Event featuring the global debut of the GMC Canyon happened to also be Barra’s very first public appearance as GM CEO even just a few days shy from officially taking helm at General Motors. The media spectacle was as expected but adding to the excitement was the announcement on Chevrolet sweeping the NACTOY North American Car and Truck of the Year. The Silverado pickup and the Corvette Stingray coveted the awards on Monday, January 13, 2014 at the start of the North American International Auto Show in Detroit, Michigan. Barra started on a very high note and I can only imagine how all eyes and ears will be following her every move from here on.

Here are more of GM’s top women executives that we had a chance to meet during the NAIAS media days:

Davis was named senior vice president, Global Quality & Customer Experience on July of 2013. This appointment expands her customer service role from a U.S. position to oversee the rest of the world where GM does business.

On May 2012, Chan joined GM in a newly created role as President, Global Connected Consumer. In this capacity she reports to GM Vice Chairman Stephen Girsky and has responsibility over the recently formed global infotainment Business Unit as well as Onstar’s global business operations.

As the brand champion of the GMC brand, Elmsley will provide strategic design guidance and day-to-day leadership to the exterior and interior studios. Morever, she will support the designers changing how consumers live with their cars through GM’s in-car infotainment systems in the User Experience Studio. She once led the team responsible for the Chevrolet and GMC vehicle interiors including critically acclaimed 2014 Corvetter Stingray and Camaro, all-new Silverado and Sierra, and Tahoe and Yukon.

Burke brings a collaborative approach to her role as the chief engineer for the 2015 Chevrolet Colorado midsize truck. She and her team are responsible not only for engineering and product development for the midsize pickup, but also for developing plans for achieving the truck’s business objectives.