I’ve always been fascinated with the historic mansions lining up the Logan Square Boulevard, and one can only imagine in the most romanticized way on how the people lived at the time and era when Chicago was just starting to rebuild their lives after the Great Chicago Fire of 1871, the Haymarket Affair at 1886, and the 1894 Pullman Strike. So when Chicagonista partnered with Comcast Illinois to host an Influencer Media Dinner & Tour of the Ryan Mansion, I was beyond thrilled!

The Ryan Mansion was built in 1907 and said to be the first building constructed on the Logan Square Boulevard. An Irish castle-inspired built by Michael and Anna Ryan and designed by John Ahlschlager. Fast forward to 2013; the mansion transformed into a smart high-tech home for homeowners Stacey Ballis and husband, Bill Thurmond. The once three-floor separate living units now converted to an 8000 sq. Ft. single-family home outfitted with five bedrooms, 5 1/2 bathrooms, two state-of-the-art kitchens, two laundry rooms, media room, gym, wine cellar, and an elevator.

The renovation of the Ryan Mansion took 4 1/2 years. Preserving the mansion to look undisturbed was essential to the homeowners. They kept all the original windows, floors, woodwork, and fixtures as much as possible. On areas that needed rebuilding, they made sure that those pieces look as if it has been there all along.

Both homeowners Ballis and Thurmond work at home. Ballis is a lifestyle blogger and a culinary fiction author, so her high-tech needs were just as critical and in keeping with retaining the mansion’s original character, integrating unobtrusive modern technology is a must! So behind all the state-of-the-art home gadgets, the workhorse superpower is the installed advanced technology of Xfinity.

Xfinity Home provided Ballis and Thurmond the security and automation they need most in a home this size. They can view and monitor everything that’s happening in their home from any device. They can also change temperatures, lock and unlock exterior doors remotely, and even have water detector systems installed in their basement. Xfinity Home can also send them pictures and videos if it detects any motion, especially on the external cameras. Peace of mind! 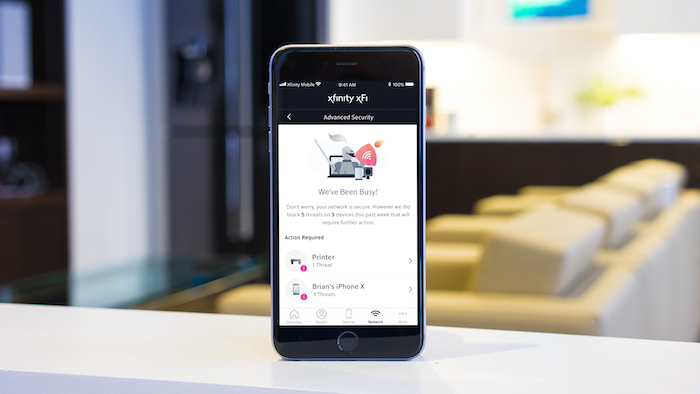 The homeowners continue to upgrade their high-tech home system. They also installed xFi Advantage, the latest addition to our Xfinity high-speed Internet service. They often host visiting guests, and with the xFi Advantage, they can see who’s on their network and control access. xFi Advantage also includes xFi Advanced Security that protects them from any malware and threats from the many devices hooked in their system. And since Ryan Mansion is enormous, the xFi Pods were also installed that help extends WiFi range and coverage throughout the entire home.

The tour was lead by the homeowner, Stacey Ballis, and Comcast’s VP of Artificial Intelligence, Jeannie Heck.

Disclosure: Chicagonista partnered with Comcast Illinois to host the Dine & Tour Event at the Ryan Mansion.