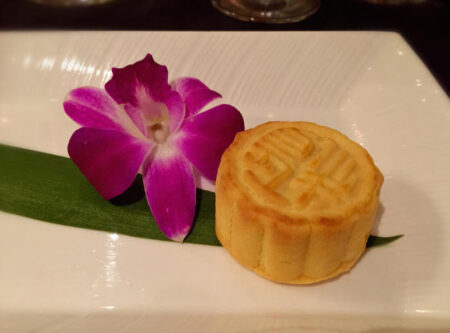 The Peninsula Chicago will be joyously observing the Mid-Autumn Festival (also known as Moon Festival) from September 25-27 for some very exciting Asian experiences. For the three years now, The Peninsula Chicago pays homage to the second largest festival in China celebrating harvest time during the brightest moon of the year. Mooncakes (sweet round lotus bean paste pastry) are traditionally eaten and shared with families and friends during this lunar festival and Chef Elmo Han of The Pen gave us a little table-side demonstration on how mooncakes are made. Here are a couple of ways you can celebrate with The Peninsula Chicago:

Below is a video from the media event and a sneak peek of the five course prix fixe menu. Chef Han also gave a small demonstration of making mooncakes and I even got to try!